Who are Our Pollinators? 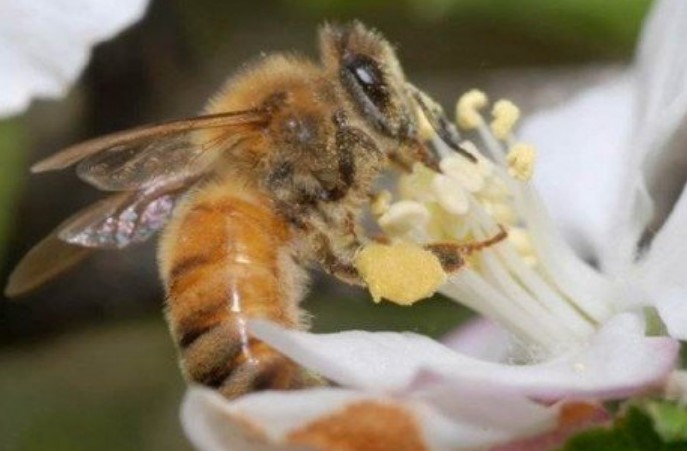 Approximately three-quarters of our major food crops are pollinated. Here we will look at how wild bees provide insurance against ongoing honey bee losses.

Honey bees are the rockstar pollinators. Everyone knows about them. There are 2.5 million honeybee hives in the United States alone managed by an estimated 120,000 beekeepers. Many of these hives (~2 million colonies) are managed by 28,000 commercial beekeepers, who manage anywhere from hundreds to thousands of hives and move them from one part of the country to another to pollinate multiple crops.

With the recent declines in honey bee populations, researchers are looking more closely at wild bees and the work they do in agricultural crops. There are at least 17,000 other species of bees described globally, and 4,000 native bee species in North America. Although honey bees get all the attention, native bees can be efficient and sometimes superior pollinators compared to honey bees. For example, in one study researchers looking at 600 fields in 41 cropping systems found fruit set can increase twice as much with wild-insect visitation compared to honey bees. In Pennsylvania, native bees are important pollinators of many of our key crops. Bumble bees, for example, can perform “buzz-pollination” (which honey bees can’t do) which is more efficient for pollinating crops like tomatoes. Bumble bee colonies also do well in greenhouses, while honey bee colonies need to be outdoors. In pumpkins, one of Pennsylvania’s largest crops, researchers identified bees from 10,000 pumpkin flower visits. Over 92% of the bees were wild bees. Bumble bees and squash bees were the most abundant. These native bees can do a huge amount of the work. Bumble bees are out earlier in the morning when the pumpkin flowers are first open. They will work even when it is cool and cloudy. Because of the way they work the flowers, they deposit more pollen at every flower that they visit. Dr. Winfree and colleagues found that 46 species of native bees in Pennsylvania and New Jersey watermelon flowers could fully pollinate crops in 90% of the fields studied. Native bees were responsible for 62% of the pollen grains deposited on watermelon flowers. Wild bees are also important pollinators in Pennsylvania apple orchards where researchers have identified 190 species of native bees. Some, like the hairy footed flower bee and horn faced bee, are extremely efficient pollinators. Quick flying horn faced bees set about 2,500 flowers every day. In comparison, honeybees may only visit 200 flowers per day. Below is a listing of some of the common native bees you will find on your crops.

Shiny metallic blue, small and industrious, these bees are important pollinators in orchards. Mason bees fly fast and visit many flowers. They are active early in the spring and will fly in poor weather conditions, making them good pollinators for early blooming crops. Mason bees are solitary bees. Each female finds a nest in a tube-like cavity such as a hollow reed or hole. She stores food in the cavity, lays an egg and seals it with mud. Then she repeats this process until the tunnel is filled with eggs.

Similar to the blue orchard mason bees, this bee is an extremely efficient orchard pollinator. But it is only active in the spring. It can set up to 80% more apple flowers per day compared with flowers set by one honey bee.

Bumble bees are important pollinators of cucurbits, tomatoes and berries. Most nest underground. When queens emerge in the spring they act like solitary bees at first, collecting pollen and nectar, building a nest, and laying eggs. But after the first batch of workers emerge, bumble bees start to divide up labor and the queen concentrates on laying eggs, much like a honey bee queen. For the Common Eastern Bumble Bee, the colony grows to between 100 and 200 bees. But at the end of the season, only the new queens overwinter and the rest of the colony dies. Bumble bee colonies can also be purchased commercially for pollination services, but it is of course much cheaper if you have a habitat that can support wild bees!

Squash bees are cucurbit specialists. As ground nesters they burrow in well-drained areas in or near squash or pumpkin fields. They fly about half a mile to a mile between crops or habitat.

(This article is part of a five-part series describing pollinators, pollinator threats, and on-farm conservation strategies as part of a collaboration between Penn State’s Center for Pollinator Research and Penn State Extension Vegetable and Small Fruit Team. Information was summarized from presentations at the 2014 Pollinator In-service.)

This educational blog is a series of informative articles from the Penn State Master Gardeners volunteers plus news concerning the group and their activities. For more information, click here.