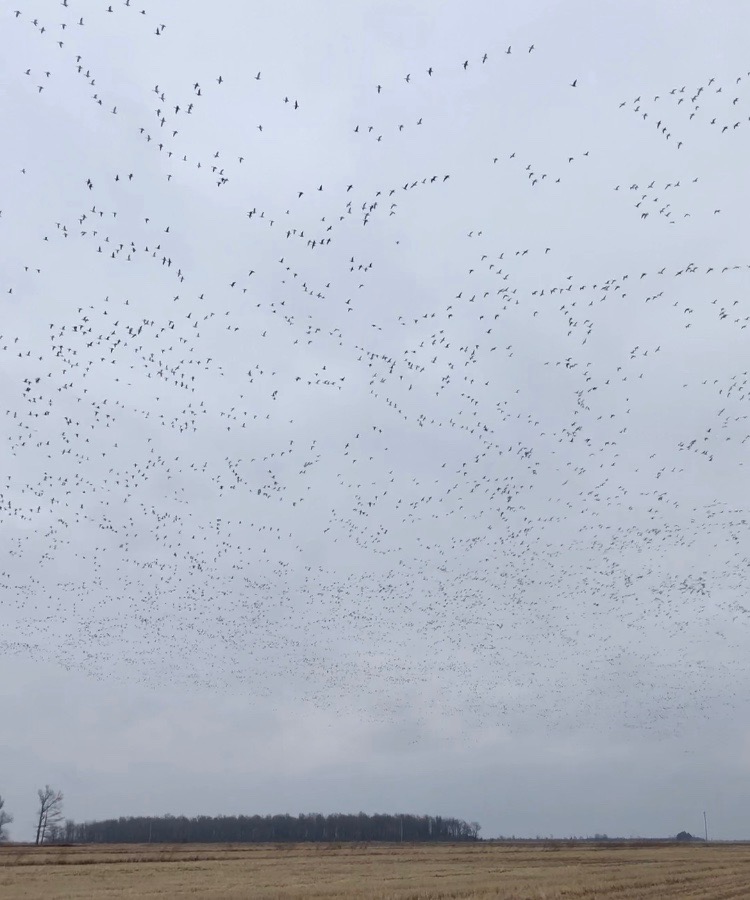 Snow and specklebelly geese fly over the rice fields of the Missouri boot heel. (Contributed photo)

After the first day in Missouri, where everything was cold and wet, I was more than anxious to enter a pit and not have to be covered in rain gear.

However, the wind could be heard howling outside the house from the time we woke up, and we knew hunting in those conditions would be a challenge.

When it was time to leave, we all walked out the door with our gear and loaded into the side-by-side. With Ben, Keith, and James occupying the seats, I hopped into the bed with Ben’s dog, Adi, and petted her until we reached the field and unloaded our gear. We entered the pit, uncased our guns, and stuffed them with three shells as shooting light started to near.

As it got light out, giant flocks of geese could be seen on the horizon, and to my surprise, they entered a field to the northeast of the pit where we were. Although I wanted nothing more than to just watch the birds enter the feed, I was stopped by the wind, which was so strong that tears entered my eyes and rolled down my cheeks.

Ducks also interrupted the peaks I would take at the geese. However, with the strong winds, they didn’t seem to work readily, but instead would give us a pass or two and keep buzzing. Then one began to work and everyone was prepared to shoot him, but he finished way over the pit and touched down 70 yards ahead of us.

After this bird, we began working another flock. Then, out of nowhere, a drake mallard came cupped out Ben’s end of the blind. Upon one shot, Adi returned to us with the drake hanging from her mouth.

The snow geese that were feeding out front got up and hopped over to a field more towards our west, and when they did, the sky was filled, not only by the v’s of birds, but by the loud calls they all produced.

Once they had all settled into the field to the west, flocks began hopping back to the original feed. Ben and I both got a little anxious then, and positioned ourselves in their flight path, waiting on low birds.

Finally, after what seemed like forever, we decided to try a flock, and as my gun journeyed to my shoulder, I picked out a mature snow and got a lead on it. After the first shot, it began to drop as I shot the other two at the birds that were then most likely out of range. I watched as the bird coasted on one wing into the field that the pit was in.

After a while, we knew that the chances of another shot were very low because of a nearby powerline. The birds needed to get high to clear it, which was a problem for us since it allowed us minimal shots. So, we positioned ourselves in the drainage ditch on the north end of the field and waited for that moment when the field got too crammed with birds. They lifted, swinging around and repositioning themselves in the field.

As we sat and watched birds drop into the field, I turned around to see where they were coming from, and realized it was an endless line of flocks as far as you could see coming to the feed. As they would stage up above our heads, they would begin maple leafing and eventually would find themselves low enough to put their feet down, backpedal, and find a hole in the vast amount of birds where they could drop.

The feed couldn’t be seen from where we were, and I was beginning to wonder how much field could possibly be left for them to land in.

Shortly after this thought, a sound like a jet taking off was heard as the rush of wings filled the air and the time we had waited on finally arrived. It was amazing how loud the birds were vocally, and as I said, “Are we calling it?” I seemed to be trying to yell over the birds. His response was yes, and his A5 met his shoulder, and my gun followed as I scanned the 20,000 birds for a nice blue.

I found one as quickly as I could and remembered back to the lead I needed on the snow. I touched the trigger and it dropped. Almost surprised, I tried to pick out another bird, but yet again upon the shot they began climbing and were out of range all too soon. Just as quickly as I could stand up out of the drainage ditch and realize what just happened, Adi came running back with the blue I had shot, and I was in awe at the beauty of the bird.

Soon after the realization that ducks were not flying like they had been in previous days set in, we headed back to the house to get gear ready for the afternoon hunt.

Columnist Hunter Redfield is a student at Cranberry High School and a member of Cranberry Chronicles, the school’s journalism/publications class.