A day hunting goldeneyes made for a happy Thanksgiving 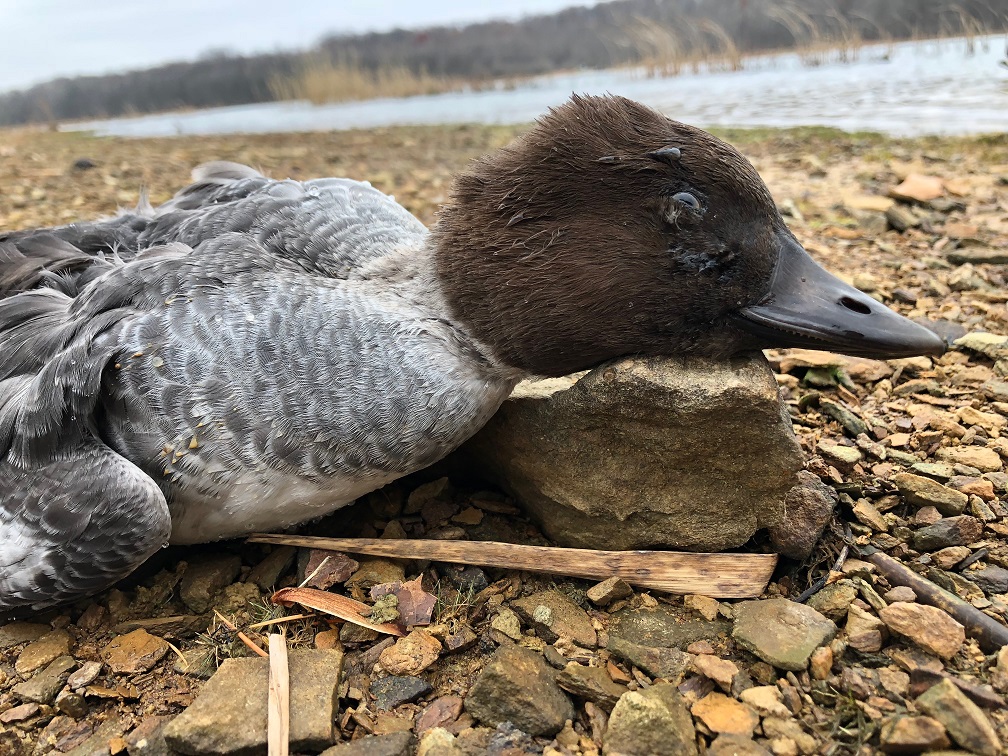 A female goldeneye laying on the rocky shore.

After Thanksgiving dinner and a couple games of pool we went home and to bed.

Hoping the weather would be good for a duck hunt, I went to bed and slept through my alarm, so when I finally woke up I was rushed to leave and get set up before shooting time. However, I somehow managed to be set up fairly close to shooting time.

Everything began to become more light out, and a white blob could be seen towards the opposite bank. As it spread out, they began to stretch their wings. I realized they were tundra swans, and soon after, they took flight heading south.

Turkeys began yelping in the woods nearby, and the sound traveled across the water, seeming to make it impossible to pinpoint them. Then ducks began to fly all over except near my spot.

An otter swam down the bank and stopped in front of me, standing up and hissing at me many times before he realized I was going nowhere and swam away.

All the ducks seemed to have settled in, and being impatient, I got in my kayak and began paddling.

I could see a white bird in the distance, so I paddled toward it and jumped a pair, realizing they were goldeneyes as they swung behind me and landed a hundred yards away.

So I turned, paddling to them, and although I was within range, I was unable to touch off a shot before they were long gone. The chase ensued again as I paddled toward them and got within range, clicking off my safety as they lifted off the water.

The hen was closer than the drake, so I gained my lead on her as she buzzed just inches above the water and as my shot went off, she folded. I quickly tried to get on the drake, but somehow ended up missing both shots, and upon turning back around, I knocked my paddle out of the kayak, but momentum still followed forward from the shots.

So, with nothing else to do, I took my shotgun and paddled myself back until I could reach my paddle and my empty shells. Then I went to pick my bird up and make it back to my decoys so I could begin packing up.

I decided to make two trips, and after unloading the first load, I debated whether to take my gun or not, but I figured I probably should.

As I made it back to my spot, I could see another hunter paddling toward where the drake goldeneye had gone, so instead of picking up and leaving, I stayed, knowing that any birds he kicked up would travel around the point I was on.

Soon I could see the drake goldeneye, however, as he skirted by just out of range. Following seconds behind him were two drake buffleheads that were significantly closer, so as they made it around some reeds in front of me, I began my lead and squeezed the trigger, watching the one drake drop not fully dead. So my focus was no longer on killing the second bird, but making sure the one I shot was dead before it dove and disappeared forever.

I was quick to finish it off, and knowing no more birds were going to come around the point, I loaded up the rest of my gear and headed for the truck, loading up and glassing to see where all the birds I saw throughout the morning had ended up, and soon after I traveled home.

Columnist Hunter Redfield is a student at Cranberry High School and a member of Cranberry Chronicles, the school’s journalism/publications class.